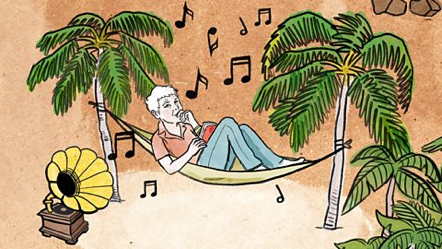 Appearing as a guest on BBC Radio4’s legendary programme (1 March 2013) was an amazing honour. It was also a chance of creating a version of myself as a ‘cultivated person’, to use the phrase that  Simon Frith, my brother-in-law used in his chapter in the academic book devoted to this programme ‘Defining the Discographic Self’. On of the editors interviewed me to obtain a ‘personal spin’ to be included in this volume. It is a truism that we all like to talk about ourselves. I am no different, and so I decided to revisit what I said in this interview.

I was familiar with Desert Island Discs because it’s a cultural institution, but I was flabbergasted to be asked to appear. I never imagined that I would be on such a prestigious and at the same time popular programme that is so deeply embedded in British culture. I listened to some of the podcasts. They are fascinating, a rich resource to feed one’s natural curiosity about other people. I was very self-conscious about one thing in particular: the need to create a story about my life which I knew I would then have to stick to for ever. The story would be truthful, as far as I could rely on my memory, but it could not be the ‘whole’ truth. How would the choice of musical favourites let this story emerge? Nostalgia was the key. The music evoked the memory – for example, a Handel organ concerto conjures up the Danish countryside because this is what we listened to one summer when driving around in rural Jutland.

Sometimes the memory evokes the music. For example, I wanted to include the memory of my mother, and this evoked a German children’s song. It could have been a lullaby, but it was Ein Männlein steht im Walde, which brought in an image of red berries and of green woods, nostalgic elements of my childhood. Then I wanted to include a contrast to this sweet song of childhood with something that I associated with the ever so slightly rebellious phase of my adolescence. The savage Soldatenlied from the Dreigroschenoper was my immediate choice. It is about the horrors of war, and it allowed Kirsty Young to touch on World War II, and this is particularly horrifying to think about if you are German. I was born in the middle of this terrible war, but I grew up in the remote countryside, protected in my grandparents’ house and garden, and unaware of what was going on. What I remember is my mother pretending that bombers flying overhead were just having a fun day out, and we were sheltering in the cellar ‘simply because that’s what one does’.

I was determined from the start to include a track by my composer brother-in-law  Fred Frith. In the end I went with a track that I have always liked for being both warm and quirky: Some clouds don’t have a silver lining.  It felt nice to show a bit of family solidarity. And this got me to Josefa Aurnhammer or Auernhammer (1758-1820), a very tenuous family connection (my maiden name is Aurnhammer). She was a pupil of Mozart’s, and, poor girl, he referred to her in his letters as ugly as sin – but playing like an angel. It is highly likely that they enjoyed playing duets together, such as the one I choose. I also sometimes play piano duets with Chris, and this is one of our favourites.

One of my lifelong loves is the sound of bells, which have happy but also solemn and sad connotations. They represent to me not only momentous events, but also reassuringly regular events as in striking the hours. There is a wonderful piece by Jonathan Harvey with the evocative title Mortuos Plango, Vivos Voco, which is based on the tenor bell at Winchester Cathedral. This choice allowed me to step outside the personal memories of a lifetime and look at the bigger picture, which certainly includes death and those who are dead.

My favourite among the favourites was the Schubert quartet No. 13, the so-called Rosamunde. It is indelibly associated with my coming home after the birth of our older son, Martin. We listened to the LP, a present from Chris, in a sun flooded room infused with the scent of lily-of-the-valley – and a beatifically sleeping baby (just for once) wrapped in a lace blanket.

You can easily find out what all my choices were if you really wanted to. Much to my regret, there was no space for Bach and Beethoven on the final list, and no space for Chopin,  Mendelssohn, or Chabrier. Next time! I would be sure to come up with a completely different set of musical pieces and memories, and I would make up a different story about myself, with different memories touching on different aspects of my life. It would be another and quite different Selfie.

Would you like to know what my luxury item was? I wanted to take a big bottle of  Aspirin, one of the greatest benefits of science to our wellbeing, but Kirsty Young deemed this not to be a luxury. My fall back was my doll’s house. Chris had built it as a surprise for me many years ago. It has six rooms and is well endowed with tiny objects and people, some dating back to my great-grandmother, and some only recently added. My little granddaughter and I are constantly reorganising it. I reckoned I would be less lonely on the island if I could play with a miniature world.

The book that I choose to take with me? The book is a beautiful medieval Book of Hours.  I choose the 15th century Dutch Book of Hours from the Sir John Soane Museum Research Library that I had the privilege to gaze at reverently and study some pages in detail.  Medieval manuscripts with the feel of their pages, their delicate lettering, strange ornamentation and sumptuous illustrations, are a secret passion of mine. For many years I longed to immerse myself in these astonishingly beautiful and mysterious works. On a desert island I could at last indulge in this passion.

I would have thought it would be very difficult to be asked about what music I listen to and why, and how it relates to my life, and also perhaps not very interesting. But with the right preparation it was a rich experience. I had not even thought about this before, but it became clear that broadcasts, such as Desert Island Disks, would not exist, if it were not for a small team of wonderful people, producers, researchers, editors, who do an enormous amount of work in the background. As it happened, all of them were women.

The experience also made clear to me that I’m by no means as unique as we all think we are. There are all these other castaways, and in a strange way I think there is something similar between us. Similar in the sense that we are ready to tell these stories, we’re ready to make connections with personal memories and pieces of music that we’ve chosen. So, ironically, it made my own life history and musical taste seem both more special and more ordinary than I had thought it was.