The music in my life
We like to think that our lives are not just a random sequence of responses to events, but follow some sort of pattern. I have some experience of creating such patterns. For many years I had to write progress reports concerning my research grants. This was always a fascinating exercise. I had to show how the various tangents along which my bright young students had diverged, cohered into a perfectly rational narrative. Now I will attempt to create such a story on a much larger scale.

But is there an even larger pattern beyond my academic career? My life in research didn’t begin until 1965 when I started my PhD at the Institute of Psychiatry. I was 23. But I have a distinct and probably unreliable memory from the age of about 12, of being asked the standard question of what I wanted to do when I grew up. I replied that I wanted to be a research scientist. I wonder what I thought this involved? I remember two activities that might have some resemblance to research. One was bird watching; going up onto the North Yorkshire moors to look for curlews and the nesting colony of black-headed gulls on Summer Lodge Tarn. The other was retiring to the attic and mixing together various liquids to make ‘cocktails’. However, there was another parallel thread in my life, which, at least at the beginning, was as important as research. This was music.

There was music on both sides of my family. My maternal grandmother, Rosina Wiles, was a fine pianist, although I don’t think I ever heard her play. I still have her piano, a baby grand Obermeier, from Harrods and also her personal copy Beethoven’s piano sonatas, bound in red with her initials, RMW, in gold on the cover. I also inherited her brother Gilbert’s violin music. This was typical Edwardian sheet music, mostly by Fritz Kreisler, bound into two volumes for violin and piano. My father was also a fine pianist and all-round musician. His Steinway still lives in my sister’s farm in Yorkshire. I remember him playing Brahms and also modern pieces such as the ritual fire dance from de Falla’s El Amor Brujo and John Ireland’s The island spell.

I didn’t meet my father until I was 4, when he came back from the war. Up to that point I was living with my mother in a cottage near her parents’ house in Cross-in-hand. But shortly after my father returned we moved to Hampstead. The house was divided into three flats. Upstairs lived two elderly sisters, Freda & Frances. Freda was some sort of scientist and went out to work. Frances stayed home and I would go up and visit her. She played me records and taught me to recognise the cuckoo in Delius’ ‘On hearing the first cuckoo in spring’. I remember finding this quite difficult. I think it was at about this time that I decided that the greatest of human endeavours were writing poetry and playing music. The pre-eminence of poetry emerges in those wonderful old books: The House at Pooh-corner and the Wind in the Willows. The heroes of these books, if hero is the right word, are both poets. Being a poet did not seem to be something I could learn. But I could learn to make music.

I started violin lessons when I was 6 with a lady who lived in one of the flats on Finchley road, at the bottom of Arkright Road. I don’t remember much about these lessons, but, after a few years, I was playing Vivaldi’s violin concerto in A minor. Meanwhile my father was teaching at UCS and was involved in a lot of music. One of his colleagues was Wilfred Brown. He had a magnificent tenor voice, but had been advised not become a professional singer until he was older. When he took up singing full-time he was an immediate success. I have his wonderful recording of Finzi’s Dies Natalis. Sadly, he died young. No one today believes in the advice he was given. We went to lots of concerts including the Robert Mayer concerts for children. I remember particularly hearing William Walton’s Belshazzar’s Feast and also Façade, but probably not at the childrens’ concerts.

When I was 12 we moved to Yorkshire when my father became the headmaster of Richmond Grammar School. This was the only school in the town. For the first year (or perhaps less) I was a weekly boarder at a prep-school in Darlington. It is hard to believe today, but I got there by cycling along the Great North Road. It turned out to be an extremely dodgy prep-school like something out of Evelyn Waugh (pronounced Woff in Yorkshire). All I remember of the staff was the headmaster and his brother who was probably an alcoholic. So, I soon stopped going to Darlington every week and attended my father’s school for about a year.

We all agreed that it would not be a good idea to attend the school at which our father was the head master, so my two brothers and I all went to the Leys School in Cambridge. This school was chosen for two reasons. First, my father’s good friend Donald Hughes (my godfather) had taught there and, second, the school had a very good reputation for music. This reputation was clearly justified. Music played a major role in the lives of all three brothers. Simon became professor of music in Edinburgh and Fred became professor of composition at Mills College, California. I continued to study the violin and became leader of the school orchestra and the school string quartet. I remember one speech day at which we played a Mendelsohn string quartet and the viola player was also in the school play (Julia Caesar). Parent, “who was the lady playing the viola?” Pretentious schoolboy, “That was no lady. That was Cicero.” I also sang bass in the school choir and acquired a love of English church music and composers such as Herbert Howells with all those rather naughty crushed harmonies.

I was already a rather pretentious young man. I forced the 6th form music group to listen to the 2nd Viennese school (Berg’s chamber concerto), and learned one of Webern’s Pieces for Violin and Piano. This early interest in modernism and structuralism still persists.

Shortly before I left school my father had moved to York (Archbishop Holgate’s GrammarSchool). York is a wonderful place for music. I had piano lessons from the assistant organist at the minster (Ronald Perrin), was involved in a performance of Britten’s Noye’s 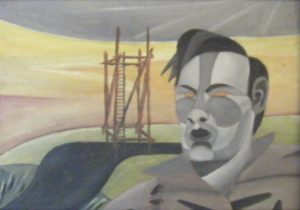 Fludde, which was performed as a wagon play, and sang in Bach’s B minor Mass in the minster conducted by Walter Goehr. Much of this occurred in the gap between leaving school and going to University. I have nostalgic memories of a wonderful summer. I analysed the music of Stravinsky & Webern and did some oil painting. I still have the self-portrait I painted at that time.

I also had a job during this gap year in the research department at the Rowntree sweet factory in York. This, I suppose, was the beginning of my career in research. We had three activities: Assessing the quality the ingredients being purchased, analysing rival products, and inventing new sweets. The inventing was done by a suitably mad gentleman who would occasionally rush in with something new to try. I learned how to measure the strength of jellies and did some paper chromatography. After work we played bowls and drank Mackeson stout.

In 1959, I know that I went on the 2nd Aldermaston March. Lots of interesting people took part in that march, but sadly I have no recollection of how I came to go or who I went with.